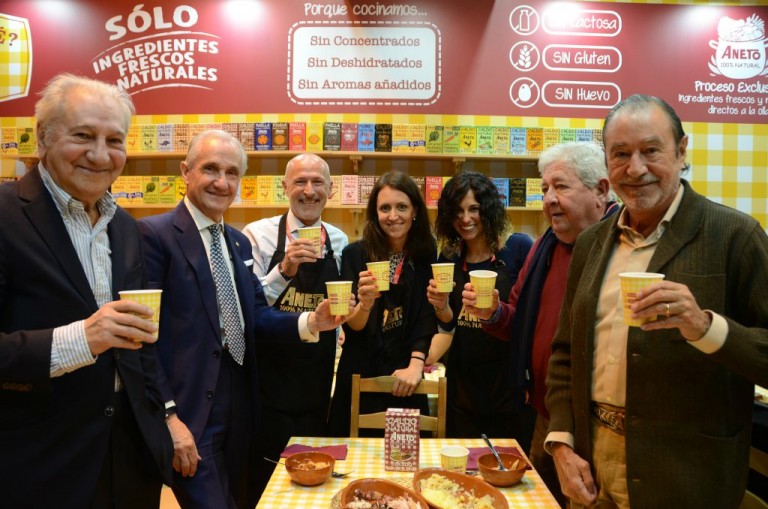 "The soup was followed by a stew assorted with all the tasty impertinences of this very cumbersome, although good dish; meat crosses here; vegetables there; chickpeas here; ham there; chicken on the right; bacon in the middle; sausages on the left...". These are the words of José Mariano de Larra, the most prestigious Spanish writer of manners of all times.

What would Larra say about the Caldo Aneto de Cocido Madrileño? Perhaps he would be surprised with such a quantity of fresh "impertinences" in gigantic pots and simmered. More than three thousand liters like homemade, but in a big way. Since the late nineteenth century, around the tablecloths of the Madrid restaurant Lhardy and between dumps of stew, aristocrats and courtiers planned overthrows of republics, introduction of new dynasties, restorations and dictatorships.

What a responsibility to prepare a delicacy with such a history!

The surprise and emotion was enormous at Aneto when Guillermo, Pepe, Mario and José María, members of the Club de Amigos del Cocido, made a "remarkable" evaluation of the Caldo Aneto de Cocido Madrileño. We invited them to sit with us at the table and share our cocido at the Gourmet Fair Madrid 2019, and José María Pinedo, Secretary of the Club, said that "it is on a par with the best broths we have tasted". The Club defines itself as "a group of philanthropic intellectuals, bored of meeting to celebrate garbanzofagic sessions of a tasting nature, which takes the decision to extend to a part of the human race the healthy teachings that derive from the systematic - and methodical - intake of the "cocido" or "olla". A reference in the world of the "cocido", his recommendations go directly to any journalistic information or guide. For us, his verdict was extremely important. Although we are a small company, we had done a lot of research and tasted the best cocidos in Madrid (most of them from restaurants selected by the Club itself). We wanted to develop the recipe with the utmost respect for the culinary tradition and its diversity. And since then, we only want one thing. That you try it too. Translated with www.DeepL.com/Translator (free version)